Pretty dolls, with sophisticated hairstyles, colourful and with magical attributes, plagons fascinated young and old in ancient Greece. They evolved from votive figurines and played an important role in the development of young girls.

Plagons were beautiful colourful dolls, with elegant hairstyles and with magical attributes that appealed to young and old. The oldest toy in the world evolved from a religious figurine into a doll and played an important role in the development of young girls. A decisive step in the transformation from religious figurines into dolls was the appearance of a jointed doll (nevrospaston) with movable arms and legs, while the use of mould by modelers boosted mass production so that every girl could own her favourite heroine!

Plagons were ones of the most popular girls’ toys in ancient Greece. It was a female figure doll usually made of clay and with complicated hairstyles. In some cases the clothing of the doll was painted on, while in other cases, girls sewed clothes for their dolls out of rags. Plagons had an educational character too, by introducing girls to the role and obligations of a woman in society. On the eve of every girl’s wedding day, plagons were dedicated to the goddess Artemis.

Making a doll in ancient Greece

Plagons have been found dating from as early as the 7th c. BCE, and their primary purpose was probably religious. They were mostly made of terracotta, ivory, wood, wax and rags.

In the 5th c. BCE emerged a distinctive type of doll with swinging arms and legs, tied with string. These jointed dolls were mass-produced in pottery workshops. The artisan (koroplastis) used to create a mould and fill it with liquid clay. The casts obtained by this process were baked in kilns and finally painted.

Where can we find them?

Since plagons were widespread in antiquity, a large number of these charming “toys” have been found in archaeological excavations, especially in children’s graves and temples in Greece and Italy.

These artifacts are now on display at many museums around the world. The most remarkable collections are those exhibited in the National Archaeological Museum of Athens, the Museum of Cycladic Art, the Louvre Museum, the Art & History Museum in Brussels and the British museum, among others.

Have a look at the most popular dolls! 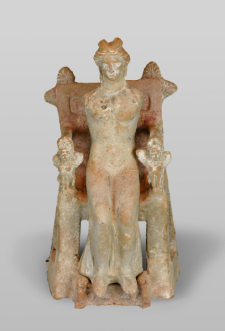 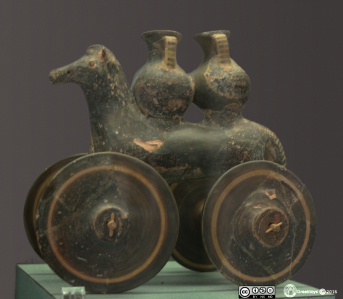